The Nonreligion and Secularity Research Network (NSRN) is an international and interdisciplinary network of researchers; the network was founded in 2008 to centralise existing research on the topic of nonreligion and secularity and to facilitate discussion in this area.

This website - launched in December 2011 - is our new home on the internet. To find out more about the changes to the site, please have a look around, or see the 'About Us' section for more information. Meanwhile, we hope you enjoy the site and welcome your feedback and suggestions for additions and improvements.

For full details of our 2016 Conference, please see here.

Masato Kato presents an analysis of what he calls a ‘non-religious’ expression of a Japanese religion that has been operating in France since the 1970s. He explores how the translation of a ‘religious tradition’ into a ‘culture’ has been perceived in the changing cultural and socio-political conditions in French society.

Can religious traditions be explained non-religiously? A religious group often attempts to present their traditions as culture in order to increase their visibility and gain legitimacy in the sense of ‘social acceptance’ (Lewis 2003:15) in the public. A group known as Tenrikyō has sought to present itself in French society by translating the image of the little known religious tradition into widely appreciated representations associated with Japan. In the operation of translation, Tenrikyō has faced with not only cultural and linguistic challenges but also been caught up in the socio-political condition, being swayed by how society defines and perceives what ‘religious’ activities are.

Originally started as a religious movement in nineteenth-century rural Japan, Tenrikyō has expanded into different parts of the world including France, where its main centre of activities in Europe is located. Aside from the religious association known as Tenrikyo Europe Centre (formerly Tenrikyo Mission Centre in Paris), which was established in 1970 in Antony, a southern suburb of Paris, Tenrikyō founded a legally separate institution called Association Culturelle Franco-Japonaise de TENRI (Tenri France-Japan Cultural Association) in Paris. Founded in 1971 as part of the initiative to reach out to the wider society through cultural exchange between France and Japan, the Cultural Association has been running various programmes mainly associated with Japanese culture including a Japanese language school as well as other activities such as calligraphy, Japanese tea ceremony, and Japanese flower arrangement, among several others.

In terms of the relations with the religious association, the Cultural Association does not conduct any form of proselytisation in its activities as per the French legal regulation prohibiting such activities in a non-religious association (Interviews on 11 November 2014 and 8 July 2015; cf. Koizumi 2005). One can in fact notice when visiting the Cultural Association that there is very little that can be linked with the religious tradition or its religious symbols, except for the name Tenri as well as some of the doctrinal phrases posted on the wall in the form of ‘Japanese calligraphy’ (fieldwork observation). It is commonly understood among Tenrikyō followers working as senior staff members of the Association that cultural activities are intended as contribution to the larger society, in the process of which they hope to have the little known name Tenri recognised among the general public. In this sense, the promotion of cultural activities at the Association is considered by those followers as a ‘non-religious’ way of ‘insertion in society’ (Beckford and Levasseur 1986:41, cf. Beckford 1985) that may help translate the appreciation of the Japanese culture into that of the religious tradition.

In what ways and in what context, then, has this approach allowed the religious group to increase its visibility and legitimacy in France? For one thing, Tenrikyō’s expansion into France has met with a period of growing (and revitalised) interests in Japanese culture and language in France due to Japan’s rapid economic growth that occurred from toward the end of 1970s (Mabuchi 1997:10-12). This is attested in part by the increasing number of Japanese language institutes and students in France in the decades after the 1970s (see Table 1). It can be observed that the relatively high level of interests in Japanese culture in France has generally correlated with the increasing number of students at the Japanese language school of the Cultural Association (see Table 2). 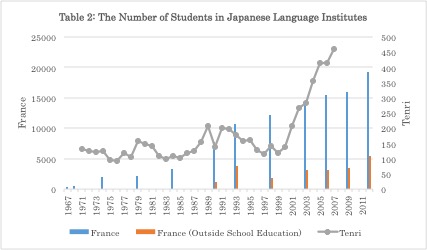 Aside from the initiative to connect with the local people, there were some cases in which they sought to translate religious language and representations into ‘non-religious’ or ‘cultural’ counterparts, particularly in the period between the 1980s and the early 1990s. One of the most intriguing examples of such expressions is a quarterly magazine called Le Japon, which was published for a total of 14 volumes between 1979 and 1983 by the Cultural Association for the purpose of introducing the current news of Japanese society as well as various aspects of Japanese culture in both Japanese and French. Worth noting about this publication is that each volume has a short article entitled ‘Tenri yūgen’ (a keyword of Tenrikyo), which was written by a non-member of Tenrikyō. Placed at the very end of each volume, the article discusses a selected doctrinal concept of Tenrikyō as one of the intellectual thoughts in Japan without any explicit messages of proselytisation or sectarian interests.

At the same time, however, there were some cases in which the non-religious expressions of Tenrikyō were problematised or challenged by the wider general public due to the shifting social discourse surrounding ‘cults’ (sectes) in France. The French ‘cult controversy’ (Beckford 1985) became prominent from about the 1970s and eventually led to the National Assembly’s report on ‘cults in France’ in 1996 and later to the About-Picard Law in 2001, which significantly limits legal right of groups labelled as ‘cults’ (Altglas 2008, 2010). Notable about this anti-cult sentiment is the changing scope of the very term ‘cult’. The emphasis in the discourse of ‘cults’ in France has shifted at the turn of the 21st century to signify ‘allegations of psychological manipulation, fraud and anti-democratic tendencies’ (Beckford 2004:29; emphasis added). Seen as ‘social deviance’ rather than ‘religious dissidence’, a cult group has come to encompass ‘a wide range of organizations and practices’ that transgress social ‘norms and laws’ (Altglas 2010:501-503).

This indeed explains what happened to the Cultural Association at the height of the cult controversy. In 1996, the Cultural Association was portrayed as a ‘cult’ group in one of the local newspaper in the 14th district of Paris, where the Cultural Association was located at the time. Labelling Tenrikyō’s cultural association as ‘Cult Tenri’, the article asserts that people fell ‘victim’ to the ‘cult’ through the activities conducted at the association (La Page, no. 28, January 1996, p.4). In this case, the cultural association was viewed as a sort of front organisation to lure people into religious activities conducted at Tenrikyo Europe Centre in Antony. As a matter of fact, Tenrikyō was not one of the organisations of Japanese origin that were listed in the aforementioned 1996 report on ‘cults’ in France. The irony here is that the approach of using representations of Japanese culture as a way to present a ‘non-religious’ image of a religious tradition in the public led to an instance of illegitimacy due to the countervailing social dynamic of the cult controversy. The extent to which the translation of religious tradition into as part of the wider culture can be effectively carried out thus relies on how such an expression is seen in a given social context.

The case of Tenrikyō in France provides a window through which we can see the possibility and limitation of an approach that translates religious representations into cultural counterparts that are appreciated in the wider host society. Research on similar expressions in different religious groups in different contexts may further reveal insights pertaining to the translation of ‘religion’ into ‘non-religion/culture’.

Altglas, Véronique. 2008. French Cult Controversy at the Turn of the New Millennium: Escalation, Dissensions and New Forms of Mobilisations across the Battlefield. In The Centrality of Religion in Social Life: Essays in Honour of James A. Beckford, edited by Eileen Barker, 55-68. Hampshire: Ashgate.

Masato Kato is in the final year of his PhD in the Department of Religions and Philosophies at SOAS University of London. His doctoral research focuses on a Japanese new religion known as Tenrikyō as it operates in France. He is particularly looking at the historical and social construction of the boundary between ‘Japan’ and ‘Tenrikyō’ with regards to the perceived cultural particularity of the religious tradition as well as the non-religious/cultural approach of propagation that the religious organisation has employed in the French context.